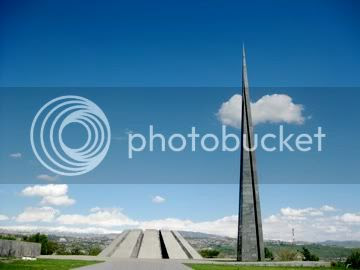 Author’s Note: The Armenian Genocide which began one hundred years ago this week inside present-day Turkey will be remembered worldwide on April 24. That Genocide began with a roundup of Armenian intellectuals, clergy,  educators, writers, community leaders and other notable members of the Armenian community in Constantinople, (renamed Istanbul in 1923), the capital of the Ottoman Empire.

I write this commentary in remembrance of the Armenian Genocide of 1915 not because a small Armenian community has made its home in Ethiopia for well over a century.  Neither am I writing because I had Ethiopian-Armenian school friends in my youth. I am also not writing because I have today friends, colleagues, students and acquaintances who are Armenian, Ethio-Armenian or of Armenian heritage.

I remember the Armenian Genocide today compelled by a simple conviction: If there had been world outrage, accountability and decisive preventive and preemptive action against the perpetrators of the Armenian Genocide, the first genocide of the 20th Century, which began on April 24, 1915 and resulted in the deaths of some 1.5 million Armenians, I believe the Rwandan Genocide which began on April 7, 1994, 79 years later to the month, and resulted in the deaths of some one million people would not have happened.

If there had been world outrage, accountability and decisive preventive and preemptive action against the perpetrators of the Armenian Genocide during WW I, I believe the Holocaust of WW II would have been unlikely. Hitler took his cue for the extermination of millions of Jews in Poland and other parts of eastern Europe from the Armenian Genocide. On November 24, 1945, The Times of London, reported a chilling quote from Hitler just before he invaded Poland in August 1939. Hitler declared, “Our strength is in our quickness and our brutality…What the weak European civilization thinks about me does not matter…. I have given the order, and will have everyone shot who utters one word of criticism… Thus for the time being I have sent to the East only my Death’s Head units, with the order to kill without pity or mercy all men, women, and children of the Polish race or language. Who still talks nowadays of the extermination of the Armenians?” (Emphasis added.)

The answer to Hitler’s question is simple: All decent people around the world who are outraged by man’s inhumanity to man still talk to day of the extermination of the Armenians during the period 1915-1923. So do all people who reject the ignoble maxim, “Homo homini lupus” (Man is wolf to man).

Historical ties between Ethiopia and Armenia

Relations between Ethiopia and Armenia go back to the First Century AD when the Axumite Empire flourished in Ethiopia. Since the late Nineteenth Century, Ethiopia has been a haven for small groups of Armenians fleeing Ottoman persecution. Some historians suggest the Armenian community in Ethiopia increased following the Ottoman massacres in 1895. Ethiopian Emperor Johannes IV is also said to have invited Armenians fleeing Ottoman persecution to come and live in Ethiopia. During the reign of Emperor Menelik II,  50 Armenians lived in Addis Ababa. It is said that the Armenians were accomplished goldsmiths, traders and architects. Following the 1905 Armenian-Tatar (Azerbajan) massacres, more Armenians reportedly found their way to Ethiopia.

In 1923, H.I.M. Haile Selassie visited Jerusalem. As he walked through Jerusalem’s Armenian quarter, he noticed a musical band of 40 young Armenian men playing. He learned they were orphans of the Armenian Genocide. He also learned of their financial difficulties and offered to adopt them. He got permission from the Armenian Patriarch and brought them back to Ethiopia. These young men were later known as “arba lijoch” (forty children). In time, they formed the imperial brass band.  Kevork Nalbandian, their band leader, is credited with composing the Ethiopian Imperial National Anthem “Teferi Marsh, Ethiopia Hoy  (‘Ethiopia, be happy’) which was performed by the young Armenians during H.I.M. Haile Selassie’s coronation on November 2, 1930.  That national anthem was played at official ceremonies until the military takeover in 1974. (To listen to the instrumental version of that anthem CLICK HERE.) The original group of Armenians and their children proved to be productive, successful and loyal citizens engaged in  a  variety of economic, social and cultural activities in Ethiopia.Historically, Ethiopian and Armenian Christians have been part of the Eastern Orthodox Church, the second largest Christian church in the world. There is also scholarship suggesting exchange of knowledge between Armenians and Ethiopians dating back hundreds of years. In a seminal study on “Ethiopic’s influence on the development of the Armenian alphabet” in the International Journal of Ethiopia Studies (Vol. I, No. 1), Ayele Bekerie argues, “Examination of the writing systems of the two countries reveal remarkable intellectual and cultural studies.”

Many Ethio-Armenians were forced to leave when the Derg military junta seized power in 1974 and confiscated their properties. Many moved to the U.S. and Canada.

The “controversy” over and the incontrovertible facts about the Armenian Genocide

Was genocide committed by the Ottoman Government against Armenians during 1915-1923?

What happened to Armenians in Ottoman Turkey between 1915-1923?

This site uses Akismet to reduce spam. Learn how your comment data is processed.

HOUSE OF FEDERATION ADOPTS RESOLUTION TO ESTABLISH A TRANSITIONAL GOVERNMENT IN...